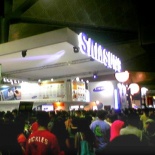 Dropped by the PC show today as usual, its super crowded & more cramped than the IT Show early this year, maybe due to a smaller hall size. Nevertheless, had the crosshair’s set on a new notebook for Mum, who was there with Dad today as well. Been sometime since I went for an IT show with my parents too, guess its an exception as mum needed the “expertise” with her. Mum didn’t quite like the $1999 Dell XPS M1210 I recommended, mainly because of the 12.1″ screen she have some problems reading text on. Strangely she’s quite geared towards the similar sized $2099 Samsung Q35, something which didn’t cross my mind at all, besides looking through a few Asus lappies. I mean being gaming orientated, an XPS with a Geforce 7400 256MB system for $2150SGD fully configured definately has a drool factor. But as a business laptop, an integrated GMA950 would be good enough as well too, with more battery life at disposal.

Samsung Q35-C006
Samsung displayed what it claims to be the “world’s smallest dual-core notebook,” the Q35. It weighs a mere 1.9kg, and has the following specifications:

😎 For $2099SGD (Show price)
The Q35 even has a six-cell battery, allowing it to supposedly get up to seven hours of life, which I still yet to see for myself. I estimate actual battery life to be around +-5hours. Mum will be dropping by again tomorrow to purchase the laptop then. 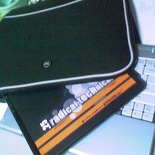 The interesting thing is them allowing me to take the case out from their store before paying to test out sizes at Fujitsu’s booth on the other end of the hall. The other most interesting thing is approaching Fujitsu staff telling them that I am not purchasing their laptops, but actually just checking out whether my Notebook model on display can fit into the cases, which they happily allowed too with the exception of non-removable cable locks all around, nevertheless they were very helpful Asiapac salespersons for someone going beyond the call of duty.

Since we are at Suntec, finally got the Aibi Pedometer at $15 (usual $39.90) from the Aibi Concept store, will be testing it out on a 15km run tomorrow. Also purchased 100pcs cake box of 16xImation DVD-Rs. Intended to get a 2GB Thumbdrive, 2GB CF Card I’ve been saving for since last year. but was cut short when the store I am intending to get it from, Best Bargain computers ran out of stock for their $99 Mini 2GB Imation Thumbdrives, not to mention completely out of the 2GB CFs & 4GB Transcend SD Cards. Other stores are selling them at $106. Nevertheless, as memory prices can only go down, on a brighter side at least I saved some money as whole, only to spend it later I guess…