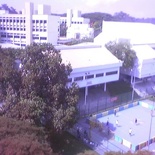 Got a call from 8 flags Computers around 5.30pm on thursday afternoon which I missed (was in the gym during that time after school). Recapping, dad loaned me the car for today just in case I needed to drive to the store to collect it (so as after he found out the “interesting-ness” of bus commuting to work). So its very much a car commuting day me for to school. Called the store right at morning opening hour while still at school to confirm the order, yes indeed it had arrived, all spanking new from Japan, in one week too, my Fujitsu T4020. Strange that Sheena’s laptop order was placed earlier but had not arrived yet. Nevertheless, linked up with mum after my last class ending noon at school where we drove to NTU for yong tau foo lunch at Canteen B, followed by the collection of the laptop.

😯 The interesting thing is that 3% extra is charged when we pay by Visa, a payment mode preferred by mum for an expensive $3100+ laptop. Anyway, neither do we know finding ourselves almost emptying the NTU’s ATM machines just to draw out cash from both our accounts to pay in cash overall. Thank goodness the Progress Package came early, if not I would had definitely left a big hole in my account! Checked for dead pixels at Canteen B just outside the store, so as they have a policy not to do so in-store, weirdos. Anyway the initial boot & check was a success, no dead pixels & system functioning a-ok. Drove mum direct to work thereafter, as her bus fare there will be just as much as the ERP into the CBD anyway, then back home to open the bag of goodies. 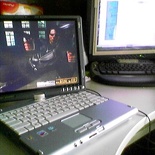 On top of the system, a lapmate thumbdrive, optical mouse & Fujitsu haversack was included as well. Marcomedia Studio 8 is in the package but have to be collected at a later date due to expired stocks. The interesting thing is the laptop haversack, out of the ordinary old traditional black laptop sling bags. This one definately not only looks contemporary, its also most importantly, discreet. Back at home, what else can I do but to get installing all my programs & benchmarking with 3D Mark 2001 & 2003. Scores are a little dingy at 5000 3D marks, but its a business work lappy anyway, so I guess its very much acceptable, just Doom 3 is largely out of the question. Nevertheless I love my new lappy!

The afternoon was very much spent warming & customising the system, till the evening where Sheena & me drove to SGX to pick my mum from work, followed by dad. Dad’s working overtime so he caught us very much late at 8.30pm+ where we made our way to Red Lion Zhe Cha at Redhill Market for Dinner in place of the vegetarian buffet at excellor hotel near Hillstreet, or even the intended Zhe Cha at Zion Road food market. This time I can really say I took the car for the whole day, driving my family all around & finally back home at the end of the day. Man the millage… & man was I tried.. but otherwise happy with my new toy!