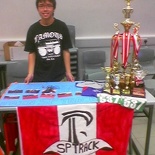 Yesterday was the second day of the freshmen enrollment day, which goes in hand with the CCA promotion day as well. Interestingly after each freshie is enrolled, they will have to pass through a series of classrooms where student clubs had set up booths to promote their respective CCAs. After going through this sequence & passing through the laptop purchase corner, then they are finally being able to exit, evil!

I was manning my club’s Track & Field booth for the whole day then, & got 10 freshmen to sign up for the day (out of the odd hundred which came through). 10 new members was a number seriously “owned” to the number signed up the day before – “record” 2 people, so as my track member Darius said & who joined me in the promotion booth in the afternoon. Elrick also dropped by for awhile during lunchtime, who relieved my position for lunch.

❓ Dropped by the Student Alumni & Affairs (SAA) department to enquire about the SP scholarships I am dying to apply, if successful, I can get approx $3000 in total for the year, minus about $2000+ for school fees, I will still have about $900 extra spending money for my laptop! Moreover, asked them about a flaw in their Scuba diving course featured in the 27th Student personal development programme. You see, diving manuals are supposed to be included in the course package, but we were told in the course that manuals have to be purchased separately as its not included in the discounted package they offer for Students, contradicting? Sure is, as controversial it will be, I will do what it takes to get the manual under the school’s accord, as the manual is officially stated to be provided black & white on the pre-registration.

😈 The SAA is notorious for red tape, payment & awarding of CCA points, taking up to a year to get anything done. I guess to date the SP Student Alumni & Affairs (SAA) owns each member of the track & field at least $50-$100 for transportation, competition registration & admin fees, since last year. But to date, not a single cent awarded, not to mention great delays in CCA points submission as well. 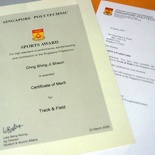 There was an interesting thing I got in the mail yesterday, an expected large envelope with an SP SAA stamp on it. Initially I thought its some official letter or cash bonus notification for the few best performing students. Interestingly it turned out to be a Sports Award Cert which I recalled my president nominated few of us in early this year. Personally, I’ve never really seen the real through value of the sports award or even know about its “prestige”, though it looks & sound nice, a nice achievement to add to a portfolio I guess.

Been working quite hard to clear commissions & jobs in time for my birthday tomorrow, then tomorrow, strictly no work! Only play whahaha.