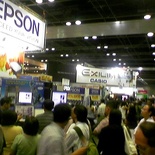 Show report! Visited the IT show (Held Suntec 9th-12th March 2006) yesterday evening on the opening day, Thurday to beat the weekend crowds & check out the good fresh deals. The so-claimed 4m wide walk ways are really really unbelievable. It was so clear I could even lie down flat on the exhitbiton floor & claim that I could did that in a crowded IT show! So as my friends were crazy suggesting that, but I really don’t mind doing that for a wager if they wanted haha.

Geared on Laptops
Anyway many people I know currently are looking for laptops, let be friends, relatives, acquaintances & even including my own sister (not to mention me) haha so I guess its time again to plunge into the show & update on prices & happenings, specifically on Laptops this time.

Best Deals
Generally, Dell & Acer stole the show for the best bargain PCs. Sadly Fujitsu, Toshiba, NEC & Sony are still selling 1-year old laptops, clearly what they are doing are clearing or old or current stocks, theres not my innovative products on the current Core Duo systems yet, & their prices are not competitive either, very much like everyday store prices with extra “freebies” like a cheap optical mouse, external harddisk, etc (worth $200 as they claim my ass) thrown in. Obviously people like me who know the market rates will seriously shun such ways of marketing. The IT show for these companies is just an informal gathering for them to sell their everyday products, no good deals at all.

On the contrary, Compaq/HP & LG did come out with newer month-old laptop models, but are just too expensive ($3,500++) , overal not a good bargain from my perspective.

Sales people
Furthermore, most of the sales persons I approached are just typical students starting the commissioned-based job on that very day, just for the $10/hr wages, but they all know nuts about PCs – Their knowledge of the product they are selling is as limited to the very flyer they are handing to you. I tested sales-reps from LG, Fujitsu, Toshiba & they heck don’t know anything about even current models of laptops their company is selling but not featured in the show, not to mention giving “blank looks” when you ask them about upcoming release dates of a particular laptop model featured on the company’s very own press releases & website!

I have quite a few friends working on the IT show (& past exhibitions as as comdex, comex), so I know how the system works. Sadly the PC makers choose to hire such incompetent sellers, obviously they don’t know what they are lacking (though its good money for us students to work there as a whole).

My Laptop picks
After my observations on, the best laptop deals are, tata can you believe it from Acer & Dell. Though Acer are one of the few brands I usually not patronise, but I definately have to commend on their ambitiousness to put in the best configurations into most of their laptops at a steal-away price (value for money), contrary to other brands like Fujitsu & NEC who take ages to release a new system & they prices are often fixed. Dell shines for the lack of the middleman & price. Heres a summary of the best for money, not to mention latest month old laptops running on the Intel Core Duo “Yonah” Platform.

My General advise to anyone intending to buy a laptop now is to go for AT LEAST an Intel CoreDuo or AMD Turon 64 (Try NOT to get the Dothan or Sonoma 700 series based laptops, this technology has it roots more than 2 years ago!). If not in 6 months time your laptop will: 1. Be 2 generations old with 64-bit laptops out September & 2. Unable to Run Windows Vista (aka windows longhorn) when it releases Q3 this year (at least Intel GMA950 required).

Best Laptop buys of the show

Other than that, another thing which caught my eye are how flash media prices had become now, not to mention harddisk too, I remembered paying $280 SGD for a 250GB Hitachi Harddisk once, now a 300GB Maxor Harddisk retails at $179 in the show. 4GB SD card hit the below-$250 price for the first time, averaging $239 SGD, with the lowest going at $218 SGD at Best Bargain computers (yes the SimLim hardware store). Rates for their Transcend 4GB SD was $299 in January & is $218 now, dunno should I go for it, if they can bring the price so low & make a profit from it, a < $200 price may even be possible in a few months time Mmm decisions, decisions.

Yes prices do change alot now, & I still recalled paying $75 for a 4MB Sony Memory Stick back in 1999 before, OMG!