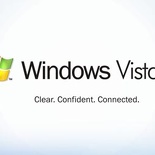 Due to be out in around Q3 this year (despite rumors of a December 7th release). It will be out in time when intel launches their Core Duo 64-bit Merom processors. This new generation operating system, the successor to WinXP will be launched primarily as a 64-bit OS (though 32-bit versions will be released too), allowing better & faster computing power for the future (with at least 8x the increased computing boundaries of 32-bit systems, e.g from 4GB RAM to 64GB RAM in the future).

So a general advice now is not to buy any 32-bit PC or laptop now or in 6 months time, it will be 2 generations old.

With that, here is the juice:

Hehe on a hindsight, hopefully Fujitsu-Siemens will release a Merom 64-bit Tablet PC by year end, cause I had been following up with their tablets since last August & they are by so far the best to fit my needs. Would be upgrading just in time when both Vista & Merom are released then.

After a store roundup, Windows Vista OS is available now in Singapore selling in SLS at these following rates!