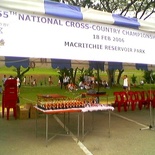 And so there were we, or me on a very hot Saturday afternoon in Mac ritchie after lunch for the SAA National X-country championships. The rest of the team was late but I was there early around 1pm to check out on the admin stuffs & such anyway, such as the availability of safety pins.. duh. It is also then where we are informed the 10km Mens open will be cut down to 5.3km due to a landslide & muddy grounds on the 10km round route.

So as I thought even the 5.3km trail we ran on was still soaking wet after the late afternoon rain, nature’s answer to the scorching early afternoon sun. & a good way to stain & get my new DS-Trainers muddy.. haiz too bad I don’t have a trail shoes & only my DS-trainer road shoe to run, I kept slipping about 10-20% of my strides due to the lack of grip & slippery-ness the trail was after the rain, resulting in a more demanding journey, physically & mentally, not to mention a longer time through the trail then expected. 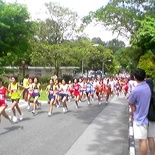 Knowing the best way I can pull up in the race is the concrete path part, where my road shoe will have the advantage, that is if I can keep my mud soaked shoes dry to perform optimally then. & while everyone was just ploughing through the mud & water like a bulllock on steriods, I was very much more conservative, running along the more solid drier sides & avoiding puddles, at a compromise of speed of course (with the exception of splashing mud water from other runners arghh! I am trying to keep my shoe clean here dude!) I left the trail at a disappointing watch timing if 12minutes only to start my game of overtaking people on the concrete road path of the race.

Overall I overtook the roughly the same number of people who overtook me in the trail, with the exception of some rather faster ones resulting in a rough maintained position with the one I started off with, I finished in a rather disappointing but satisfactory 23mins 22secs on close to the runner’s 50-60th percentile & 40-50% percentile in my Team. Thats all for sports this 2 weeks, this will be the last event till the end of my semester exams, next on the lineup will be the NTU vertical marathon at Suntec City (12th March 2006).