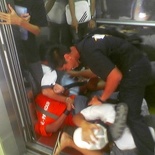 Needed some time out after the last lecture for the day in the gym. Considering most people’s resolution being to “lose weight” the gym was exceptionally crowded today after school. But rather manageable otherwise. Did my usual bench presses, abs & 6km on the treadmill before turning in the tower for the evening. & man it was 6.30pm when I reached home then.

Got 94 for my engineering materials class test. Initially I feared not even being able good grades or even get maybe even 80 or so in the test. Considering how dry the subject can be. Neither would I know of the leaked news from my classmates of me ace-ing the paper (with the exception of someone from another class getting a perfect 100) . As usual its a tradition where the highest scores of the class get to be “moshed” in the lift, (in a rather friendly way of course) but called back due to previous injuries sustained by others on past “moshes”. As least the campus block lifts are spared from torture.. for now.

Caught the ol’ show Gone in 60 seconds starring Nicholas Cage & Angelina Jolie (she looked very very different in the show) a moment before on TV, & man it had been sometime since I’ve actually found time to sit in front of the TV at the living for a show with my family, so as Mum so “jokingly remarked” having “migrated” from my room’s PC for a change… I mean I really can’t help it! especially when you have a TV tuner installed in your computer right?

As the techno giz I thought to be, I am still not very efficient in scanning for channels on digital cable. Though converting to digital for about half a year plus since it was offered by starhub, its actually the second time in my life handling the digital cable remote, still preferring analog cable… Contrary to my sister’s super uber l33t pwner skills of being able to efficiently whip digital channels, info & games all out at the flick of her wrist. Man I am owned… I mean MTV is not even channel 11 now, let be 5 Discovery channels! argh!! whats the channel number for HBO now? I think I should go suck my thumb, grab my wooden club, put on my leopard skin robe & crawl back into my cave…

& niff! check out the Gender Genie. Its a online script which determine the sex of it’s author from any form of written literature you throw at it. I personally tried it on my blog entries & they were 100% all accurate. Wow!