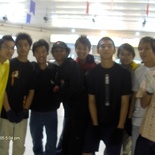 Its time of the year again for a class outing & they nominees were – trekking at pulau ubin, day at wild wild wet or ice-skating at fuji ice palace. Apparently, not too many were in favor of going for a public fat-exposure-parade at downtown east, nor would any appreciate nature on the tracks, so the Ice-skating option was the most sort after option, thus landing us today at Fuji Ice Palace, Jurong!

I had not ice-skated before, but being a inline-skater myself, I can say that ice skating is so much easier than inlines, you can really pick up speeds faster, turn & change direction faster without much resistance, not to mention being easier and not as tiring on a whole, considering having ice-skated continuously for 5 hours in a row – a feat I’ve not yet accomplished on in-lines yet, even on ABEC-7 bearings.

😳 Many in my group however, were virgin skaters & greeted the cold & occasionally wet ice more than the number of digits you have to count. & man yes were they wet. But it’s not uncommon though, the all familiar “Thud” is always evident in the ring, the spectacular ones being the “Domino Flop” where a bunch of learners fall together as a group (& all you need is one to fall in order start the chain reaction) yes very spectacular indeed… For me, I was glad to be dry throughout the whole skate session, now wet dark patches on my jeans at all, considering having almost 10 years of skating experience on my back… though I don’t really skate very often either, only very very occasionally.

This naturally put the experienced ones as teachers to the group, having not only act as supports while they make their first “baby strides” on ice but the frequent need to catch/tame their frantic waving arms whenever they lose their balance or fetch them whenever seem to be heading in one direction without stopping. Overall by mid-day, all of them are able to skate, (though awkwardly) without any assistance. A rewarding feat for most of us there before calling it a day with dinner at Long John Silvers.