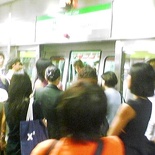 No, its not your typical excuse to give when you are late. Apparently the MRT I was on today “broke down” because one of it’s 48 doors refused to close, resulting in a 15min delay on a train packed no other than a can of sardines similar to that of Tokyo’s rush hour. The staff all tried frantically to isolate & close the door, but to not avail, its stuck half- open.

Its all underground at city hall, they kept trying to open & close the doors in so many configurations till one point, all the train doors remained open while all the outer platform doors closed, tunnel-ly freaky. They eventually came to a concluding point where it too dangerous to run a door open with full passengers, so everybody have to “abandon train” turning city hall into a scene no different to that of a sell-out Rock Concert. Thank goodness the next train arrived within the minute, also all packed… dammit!