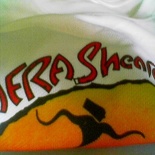 Had wanton mee for breakfast at Redhill Market, as the usual “econo beehoon” store wasn’t open so early at 4.30am. Oh well the early bird gets the worm then. Upon reaching the padang, as expected the place was already packed when I was there, not to mention the traffic & carparks there.

Pre race:
Desposited my bag & met up with Eric & Darius as intended at the park. Dropped by the park fountain to meet up with the SGrunners who were quite an interesting bunch of runners… Our man of the morning, Lonely Runner was late.. but ahaha he appeared soon after, got to meet forummates in person, like the brokenrunner, taz, sotong & the rest of the gang. After a few short greetings & introductions, rejoined back to my track team as the race was starting already. Then nature called…

I started late, remembering hearing 3-2-1-GO! when I was still in the toilet beside the esplanade bridge, luckily I did all my warm up while in the toilet queue. (haha time management to the maxes!) Missing the start is ok, as timings are gantry based, so I just have to forgo the gun-time completely. As usual, one thing I like about the Sheares 21km route (or the upcoming 42km stand chart route) are the rather scenic views the route offers, whether its passing landmarks such as indoor/outdoor stadium, kallang river, etc… its just so.. relaxing… Coupled with my music player.. ahaha shoik! did I mention tend to overtake more people when I play techno? ahaha!

The race:
Competition was not up on my list, but Completion was top, so what the best a runner can do but enjoy the run & make it as pleasant as possible? yea that includes “hangloose” cheering towards bystanders/in reply to the cheers from the public at the east coast park/roadsides, doing my bid by not littering at waterpoints (though my 1 cup quite insignificant duh!) or slowing down with a pose & smile whenever I see a sportsphotoX personel… it like, wooha make way buddy here I come for the shot! I think my sports photoX pics this time will be rather more interesting… now to my own pics: 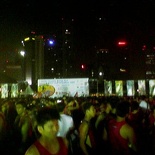 Its early &, its crowded! 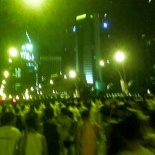 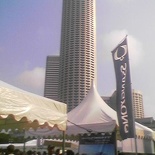 Great run, reasonable timing of 1:55 on my watch.

Post race:
The moment I read.. bag storage in 5 tonners, I knew that collection would definately be rather interesting, having gone thru NS & knowing the in & outs of the rather new MAN tonner, it may be a good portable storage solution but when it comes to finding the bags in that truck… haha it just one big blackhole & just takes forever to get anything out of there. Lucky for me, my bag was sorted out of the tonner in the tentage, so I very much got my bag easily without a hitch, contray to poh fong & darius.. haha who had to keep their arms raised showing their number tags up behind the tonner for ages!

Met Nelson, my scout platoon trooper, he was quite surprised to see me running AHM this year, haha doesn’t mean I am out of the army= no more AHM! ahaha! Registered for Vertical marathon & 2nd link bridge run thereafter. Through & by courtesy of our track captain, who volunteered to do all the paperwork for us.. haha life is just so convenient these days. Met up with the rest of the SG runners for phototaking, will post them once they get it up on site! Aliased with mum & dad thereafter who were resting after finishing their 6km city run. They very much welcome the idea of taking part in this every year.. a good thing too.. We had lunch at bras basah before heading home for a well deserved rest.

As I said, good day, good weather, good run. out.