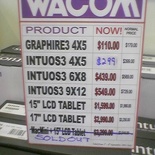 As usual, I am a living proof & verification of Murphy’s Law, as typical example today when you are in a rush to meet somebody, traffic jams appear & all traffic lights will turn red when you approach them, DANG late again… Anyway, met up with Lishen & her colleague Danny at Suntec’s Macdonalds in the afternoon today to discuss business matters in relation to the up & coming online jewelry store, xuanbymeg. Everything looks promising & its a matter of time before the online business will start to take shape in the E-commerce world.

Dropped down thereafter to meet Dom whose gang was already at the Comex 2005 exhibition center. & ITS VERY CROWDED! Strange though when I was there, they made all four escalators leading to the exhibition going downwards, & no one could go up! Usually its 2 up & 2 down. Maybe they didn’t want too many people in the exhibition center? or did someone just farted up there so that everyone’s just wanted to leave? funny… The lifts will definitely be on a beeping spree so thats out for me, luckily there is the overhead bridge staircase on the outside, which not many people know though…

As expected the place is packed to the brim, but not like “bumper to bumper” compared to last year’s event partly because of the introduction of a 2nd exhibition area (where creative’s 2nd booth & Microsoft are happily nested) on the 6th floor to even-out the crowds. As usual we have the standard few branded PC retailers HP, Toshiba, DELL & stuffs. Datamini, Twinhead & Fujitsu are not around this year though… no “new birds”.

The thing which caught my eye are some super small Mp3 players, like 2x1x1cm small, funky Frankenstein contraptions by inkstation where you can strap into your printer (starting at $120) allowing your to print 2000 full colour pages continuously at a go (whoa!) & the prices of tablets.

I thought Wacom will never reduce their prices for their tablets, till I came across a booth retailing them 100 bucks off standard retail prices. The thing about wacom is that all their products are REALLY standard prices & only authorised retailers are allowed sell them at that specified price.. shit… but even with the $100 off it still costs above $400 for a 6×8 argh!!! not enough… GReEN POwER… arghHh! Need Charge card….bzzt! 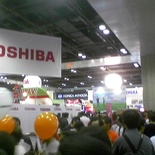 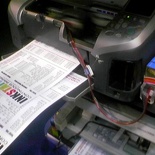 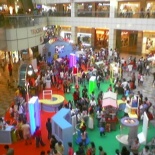 There is a common misconception about PC shows- that the prices are always cheaper… that is true to a certain extent. Generally my advice is to buy stuff from Comex only if they are controlled by the retailer, or NETT priced items we normally see in stores outside, like branded notebooks, printers, tablets & monitors. Otherwise, most items “on sale” are actually the same everyday prices at simlim. In fact video-pro & best bargain, both well known simlim stores are selling some of their items 20% higher than the prices they were retailing in simlim last month… but everybody’s crazy that all these booths, with crowds, cash & reciepts exchanged every second or so… all these stopid Singaporeans, obviously no ones doing their homework…. & man there was even a 20m QUEUE for the creative payment booth.. whoa people really have alot to spend heh… not to mention enjoying the Singaporean favorite pastime too – queuing…. Never mind loh… good for economy anyway lah!

Met Hanjun & choon liang who were working there. Hanjun got a sweet $7/hr deal distributing flyers for M1 for 2 days, while Choon Liang works under creative, obviously he can get us in an “express shortcut queue” on the creative cashier…

With all this I definitely am lucky & have Poh Fong to thank, who sacrificed himself today to collect the track team’s Sheares Bridge Run competitive race pack at the race expo at Safra Mount Faber, if not I could not make the outing today.