Home Blog Family What a Saturday! 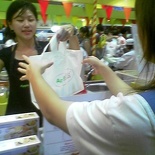 I remember reading my horoscope last Sunday stating that “I would be working harder than usual“. True enough, I was so caught up with work, school & business, busy enough not even to be able to update for days & watch my monster garage & futurama series, not to mention missing this week’s episode of desperate housewives. I guess I its time to end this relatively busy week with a good long post.

& so weekends – family day as my parents always say… Recalling Saturday’s event, after picking mum up from her morning workshop, lunch was at the nearby Henderson coffeeshop, where I sent my spectacles to the nearby optician for repair. Got my eyesight tested & hey! no deterioration, still around 125/150 degrees. Anyway I am one who just hates wearing glasses, even when driving as I find them more of a hinderance than actually aiding your vision.

Got myself a niffy mini whiteboard earlier in the morning from Toa Payoh popular bookstore to organise, motivate myself & track my school progress, work & stuffs. Visited granny’s, then Orchard after a short rest at home. As usual Orchard was as packed as it would normally be on a Saturday. But parking was quite a breeze though. Partly because dad knew all the “secret hidden parking spots”, even got $2 per entry leh!

Initially, Sheena just wanted to drop by the Singtel Hello! shop at Orchard to check out new phones to replace her rather disfunctional nokia 7250i. & thats why we were in Orchard the first place. But as all multi-tasking people we are, mum decided to do her chores & dropped by Paragon to buy her favorite sushi & bread. While I needed to repair my video camcorder at the Sony Wisma service center. So thats like 3 over places to go then. Dad just tagged along & pays stuffs… Amazingly theres no queue at the service center, so that kinda sped things up a little. Dinner was at Taka & they were having a massive food fair in the basement atrium & man did I mention that the place was packed… To the brim literally. 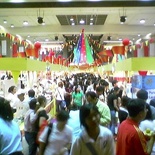 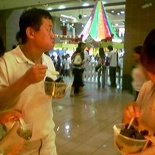 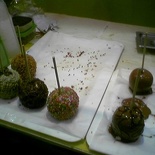 Mum intially wanted to eat at the foodcourt, notorious for the obvious lack of seating. Fed up in finding a place, we ended buying food from the festival & ate dinner standing up near the central fountain, where almost everybody there’s doing the same thing too. Guess this is one of the few times where the cleaners & security will panic at the garbage & crowds around the area. Especially towards hungry Singaporeans- nothing will stand in their way! Dad just couldn’t get enough of the Sizhuan sweet & sour soup, ordering like 5-6 servings for 4 of us. Coupled together with lotus leaf gluttonous rice & “dragon bread” & cheese hotdogs as side dishes yummy. Interesting what food they have there, they even have apple toffees, called the “Apple Sitz” by them, its nice to see an American delicacy snack right here. I guess whats missing are exotic tentacle-on-a-stick snack. 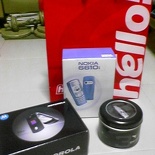 Sheena wanted a flip phone no matter what, “die die either Samsung, LG or Motorola must be flip phone one..” she said. But she didn’t expect to choose the Motorola V3 Razr in the end, partly because we all didn’t know that its going like $298 on a 2 year contract, a far cry from its launch price, close to $1000. She choose the Aluminum Black, though she liked sliver, partly because I psycho-ed her to get that colour, its just so sleek black & nice… Mmm must trade phones one day. Mum upgraded her Singtel classic plan to iOne plus as she usually recieves incoming calls – perfect for her. With that she gets a free Nokia 6610i with the upgrade. Bundled with the Moto Razr V3 is a V3 bluetooth headset going at $68, sis didn’t see a need for that. Furthermore, given the new phone she would definitely prefer to smack her 1st flip phone on her head than using a niffy bluetooth headset. Highlighting the fact that I almost spent $200 on a jabra BT800 early this year, I guess this headset will do fine too. It even have 8 hours of talktime! Furthermore it matches the colour scheme on my Dell Axim x50v too, perfect companion.

Back home, one can only sit back & admire the stuff we’ve brought for the day, man I think we overspent, but it all felt good, dinner was cheap too, guess shopping is indeed good therapy!