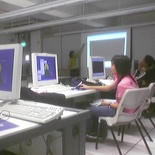 The first week is rather like used getting accustomised to the new timetable & campus life for the class, as I guess many were previously from secondary school & such. Campus life is definitely something new for them. But everyone will get on with it in the end. Especially bad habits such as automatically falling asleep the moment the lecturer starts talking, its like some curse or spell you see… On lessons, from what I see, semester 1’s curriculum is largely based of what I’ve learnt from “A” level physics such as kinematics, thermodynamics & some basic physical stuffs here & there, very much good revision though. I guess keeping my old lecture notes do help abit in supplementing my knowledge.

This week is CCA week & the options are pretty much narrowed down to SP adventurers, Track & Field (T&F) & the Youth flying club. It turned out that the most bull-shitting CCA is the Singapore Youth Flying Club (SYFC) offering “free” flying & training. As it is, usually anyone who signs up just wishes to fly as part for the life-time experience & such, like getting a cool pliot license & so, even if it costs alittle. Too good to be true? But nothing inside their brochure informs you that their main motive- Neither did it turn out “a club for the youth” but just another part of a scheme to recruit air force pilots for the RSAF. You want us to teach you to fly? then be an air force pilot. You want the license? then get tied down with the Air Force on a contract. Though I have nothing against the air force, besides them bring chicken wussies when it comes to flying in the increment weather on afew personal experiences with them in the Army.

I think things could be better arranged & not just promoting the club.CCA with hidden interests. SP adventurers didn’t turned out to be a too adventurer’s club I thought to be either, but actually a club which organises outdoor activities for the campus, so you need not be a member to be part of the “adventures”. Furthermore their line up is about 8 activities a year, so its like… ermm super boring? On the other hand, Track & Field sessions are on Tues & Thurs 5.30pm to 7pm. Got to know some of the people there, esp one of the coaches who was an ex-armor boy too from 41SAR previously. Not bad in all, signed up for T&F as a long-distance runner, guess I would be a track boy after all.