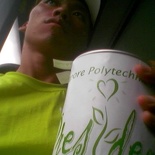 If you were to wander anywhere Singapore today, (esp near MRT stations) you definately can’t miss us in green- being SP’s flag day in support of the president’s challenge 2005 (I dunno how many times I’ve said that today, about 1000 times?). Anyway this is my 2nd flag day I’ve ever did in my whole life (the last being in SAJC for the organisation riding for the disabled, raising funds for a new roof).

I remembered the key to getting donations is not only location, but being approachable & friendly with a smile. Out of 150 clanks into my “piggy tin”, 24 donated $2 while the rest came in coins making the tin rather heavy on mid-day. Usually when you put on a good gesture & smile, people will be obliged to donate all their change & so. With only the exception of a handful (4-5 people) completely ignoring me on approach. Otherwise its ok on the general side- Business is rather good on 1 out of 5 making a donation. 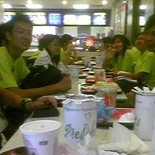 Occasionally you can thank those who’ve already donated (already bearing the charity sticker) even if they already did so to from students, & they would walk past you with a smile. Otherwise many just smiled & declined to donate, which I understand (I do that most of the time myself too). The most rather interesting donation came from a young malay taxi driver who signaled to us with his horn & stopping by the roadside near the Singapore bridge in his car to pop a $2 into my can! wow impressive!

Generous donations
The most motivating donation came from an indian business man at a bustop near chinatown who kept praising us on the donation drive. The bulk comprises of mainly working class ladies & men, even our senior citizens at chinatown are happy to help us in our charity. On the contray, all the expats I’ve approached today don’t even bother once lifting a finger to donate for us… haiz so sad. 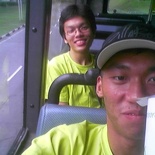 I know the widely discussed issue on flag days in the papers recently is something rather controversal now, esp with complaints & such. & I hoped that is something which don’t translate into any undesirable experiences today for donation begging (literally) on the streets. Which thankfully, didn’t happen. Overall for the day’s event our class (DME/FT/1B25) gathered at Dolby Gaut in the morning the 1st league of donations in early morning.

Then we made our way to cityhall on foot where we split up into smaller teams at Raffles City & headed to padang then funan/clark quay then raffles place/lau pa sa area with Jeremy & Luke. Ended collection at 2pm where we took 147 back to SP from chinatown. Collected a grand total of $91.46 & Mmmm unexpectedly getting the highest amount in umm, class too… woot!

Oh well I am damn tried, all in a days work!